Editorial Coverage in The Inquirer and Mirror

Quinn McCusker was the quintessential boy next door, a handsome, talented and popular young man from a loving family with plenty of close friends. He was also an addict. His death from a drug overdose on Christmas Day in 2018 left holes in the lives of his family and friends.

“I truly believe the lowest point of despair is the preventable loss of one’s child,” his mother, Liz, says in a short documentary film about his death. “And I feel it was preventable. Maybe it wasn’t, but as parents I think that is how it feels.”

The pain the McCuskers feel at the loss of their son is palpable in the 16-minute film, which was made by Addiction Solutions, Dr. Tim Lepore’s clinic, in conjunction with NCTV. Lepore said he hopes that loss is felt by the audience as well.

The film, “The Boy Next Door, Breaking the Stigma,” will screen at the Dreamland Theater at 8 a.m. Tuesday, May 24. Admission is free, but advance registration is required through the Dreamland. There will be coffee and discussion after the film.

Too many overdose deaths seem like statistics to those looking at it from the outside, those who did not know the victim. Lepore said he talked about the idea of telling Quinn’s story with Liz McCusker.

“He’s a kid who grew up here. You take a look at his friends and they all loved him. His death is a big tragedy,” he said. “It’s a form of grieving to think that what you say might make a difference to one person. If one person says, ‘my uncle Harry is addicted to opiates and maybe I can help him, maybe I can get him to see Lepore.’ That is the goal.”

“You read about a kid here who overdosed. You say, ‘Jesus, my kids knew him.’ You say ‘I knew that kid, I had him at school or saw him at a job site,’ and all of a sudden it’s not a statistic, it’s a person, it’s a tragedy.”

Lepore started his clinic, on a shoestring budget, at a time when island heroin overdoses were on the rise. He now finds himself dealing with the drug fentanyl, which is dangerously more potent than heroin.

“Fentanyl is in everything,” he said. “And it is much more potent than heroin. You don’t know how many times it’s been stepped on. In a way you’re playing roulette. I’ve had people who tell me they trust their dealer. Well, your dealer has a mercenary interest here. There were two big drug busts recently. The drugs were marked as oxycodone and they were fentanyl. It’s crazy. And there are newer drugs coming along that are more powerful than fentanyl.”

(Continued from page 1A)

It was a dose of fentanyl, Lepore said, that killed Quinn McCusker.

Marsha Egan, an Addiction Solutions board member, was the project manager on the film. She said that watching the interviews made her realize the power of the negative stigma we place on addiction, and how that stigma keeps people from getting the help they need.

“This was Tim’s brainchild,” she said. “Liz McCusker offered to do it. The two of them had the concept. Liz’s whole mantra was if this can save one life, it will be worth it.”

“Families don’t want to admit to other people that there is an addictive person in their family,” she said. “If you tell someone you have cancer all of a sudden there are flowers and cards and support. People don’t even tell other people in their own family that someone is touched by addiction.”

Lepore agreed that anything that can be done to erase that stigma is a big step forward.

“I think the shining example of what concerns me is I had this guy come in with an addiction issue and all he did was beat himself up,” Lepore said.

“That comes from our idea of opiate addicts as junkies. We say they’re dirty. They don’t feel like they need respect. And that attitude really doesn’t help them address their problems. The issue is how do we bring our mindsets around to understand this is really a medical issue?”

“What we try and do is get the chaos out of a person’s life, so they can live a normal life. They hold down jobs, 80 percent of them have a family,” Lepore said. “You also have to accept that relapse is one of the components of addiction. When that happens, we give people another chance. We are not in the business of kicking people out of our programs.”

Lepore hopes that sharing Quinn McCusker’s story with an audience, and the conversation that will follow the film, will be a small first step in coming to grips with the stigma of addiction, which might lead to more people getting the help they need.

“Look inside yourself. Think about your attitudes about people who are addicted,” he said. “They are our brothers, sisters, our crazy uncles, guys you work with, guys next door. Everybody is susceptible. There were 108,000 overdose deaths across the country last year. This film is showing somebody that a lot of people knew, a lot of people cared about, and his death is a tragedy, and we have to look at it and think how we can address this better.”

Source: The Inquirer and Mirror 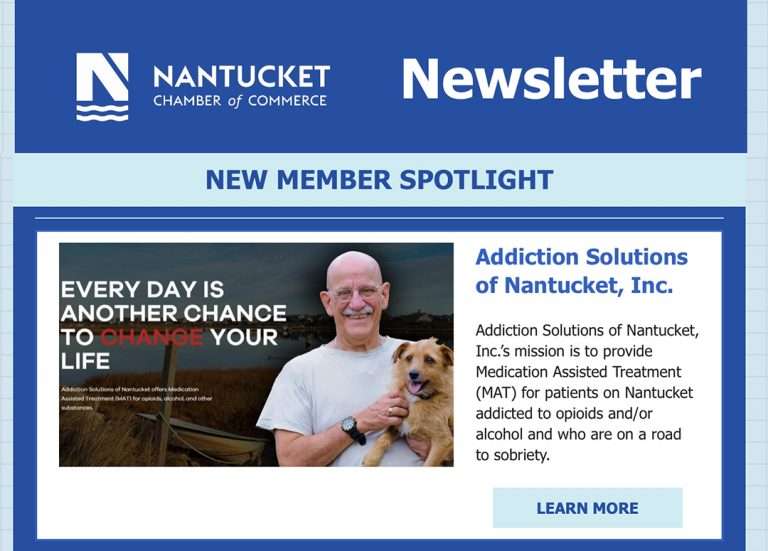